Hike at the places where those great stories occurred 3000 years ago. Blend your love for nature with your love for the bible stories.

We selected for you great hikes any hiker will enjoy. These hikes also pass through (or view onto) famous areas and landmarks associated with the greatest stories of the bible (Old and New Testament).

A bunch of short bible walks. All these walks will take you to the beautiful nature spots in the Holy Land that are also connected to a famous bible story.

Mount Gilboa (The battle of King Saul against the Philistines)
2 Samuel 1:19 “How the mighty have fallen!” 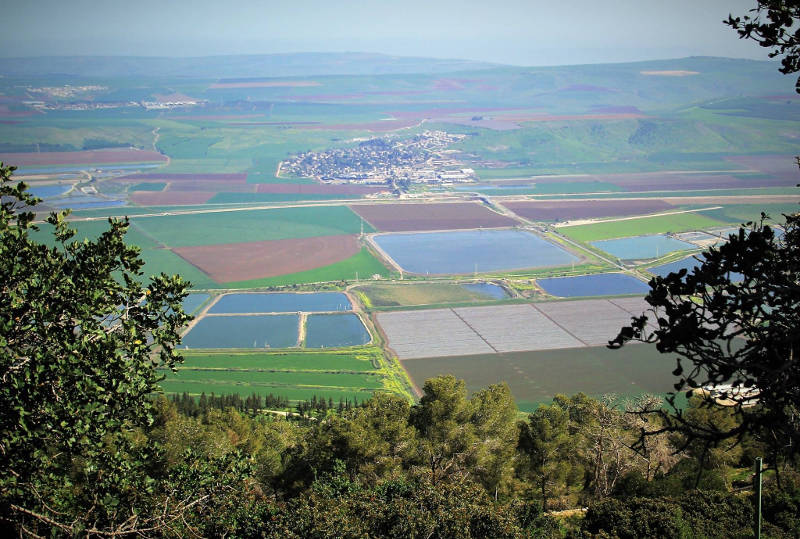 Mount Gilboa
The Gilboa is a mountain ridge that marks the border between the Jezreel valley and the Samaria mountains. It rises about 500 meters steeply above the valley and boasts amazing views. During February and March, it is also one of the best areas in Israel to experience wildflowers.
In the Bible
Mount Gilboa is the setting for the battle between the Philistines and The Israelites led by King Saul. During the fierce battle Saul’s sons were killed. Saul was badly wounded and fell on his sword to avoid being captured by the enemy. (1 Samuel 31) Then, in 2 Samuel 1, David laments the death of Saul and Jonathan (Saul’s son). This chapter includes some immortal bible phrases.
Verse 19: “How the mighty have fallen!”
Verse 21: “Ye mountains of Gilboa, let there be no dew nor rain upon you”

Road #667 (The road is called in Hebrew “Derech Nof Giloboa” – The Gilboa Scenic Road) . It starts in the Jeezrael valley here and ends in the Jordan valley here. Over the course of 32 Kilometers, it crosses the Gilboa ridge with great views all along.

We recommend two short hikes along the route:

Saul’s Mountain lookout: Drive here. You can enjoy the view, and the sight of paragliding launching down to the valley below, or make a short 1 Km circular hike on the Green marked trail that passes along the edge of the cliff.

Mount Barkan Lookout: Drive Here. You can go up and down on the Red marked trail (About 0.5 Km), or make a 2 Kilometers circuit by going down along the ridge on the Green marked trail and walk back to the car along the main road.

This area is especially attractive to see wildflowers during the season. Thousands of people arrive here during March-April to view the famous and impressive Gilboa Iris. (The exact time of blossom changes every year).

Both spots are an excellent location to open the bible in the book of Samuel and read the related chapters.

Ayalon Valley – Joshua defeats the 5 Amorite kings
Joshua 10:12 – “Sun, stand still over Gibeon, and you, moon, over the Valley of Ayalon.” 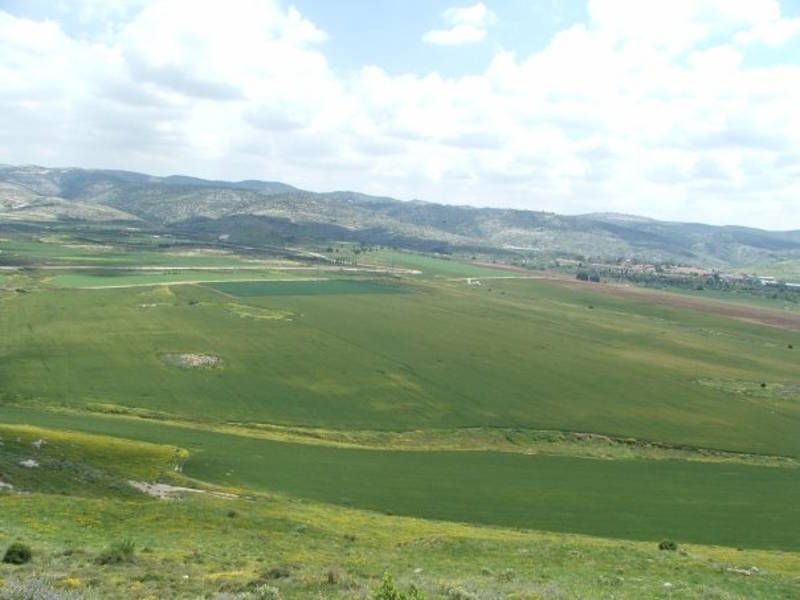 Valley of Ayalon
The valley of Ayalon is located at the foot of the Judean mountains. It is a very fertile area and therefore had been inhabited since the 14th century BCE. Ruins of ancient agriculture such as terraces, cisterns, and farmhouses are found on the hills around the valley. The landscape is attractive during late winter and spring, when the ground is covered with fresh grass and dotted with wildflowers.
Valley of Ayalon in the Bible
The valley of Ayalon is mentioned several times in the Bible. The most famous is Joshua 10. The chapter tells us about the battle between Joshua and the 5 Amorite kings. The battle starts in Gibeon up on the Judean mountain, Joshua’s army chases the Amorites down to Ayalon valley, when the sun is about to set, and he needs more time to finish the job, Joshua calls upon the lord to extend the day with the famous verse that is still famous today: “Sun, stand still over Gibeon, and you, moon, over the Valley of Ayalon.”

Ezion Geber
Ezion Geber was an ancient biblical seaport located at the head of the Gulf of Eilat, between the modern towns of Eilat (Israel) and Aqaba (Jordan). The location is a few kilometers east of Eilat near the border but on the Jordanian side. Excavations that were carried out in 1939 reviled a fortified and prosperous settlement, which attests to extensive commercial activity. The ruins date to the period of the Judean kingdom.
Ezion Geber in the Bible
Ezion Geber is mentioned several times in the bible. The 1st mention is when the children of Israel passed through during the exodus from Egypt. Numbers 33:35-36 “And they departed from Ebronah, and encamped at Eziongaber….” Deuteronomy 2:8 “… through the way of the plain from Elath, and from Ezion-Geber…” During King Solomon’s period, Ezion-Geber was an important marine commercial center. 1 Kings 9:26, 22:48 “… And king Solomon made a navy of ships in Eziongeber…”

A short hike to a fantastic viewpoint:

From Capernaum to Tabgha
Mark 2:1 “A few days later, when Jesus again entered Capernaum, the people heard that he had come home.” 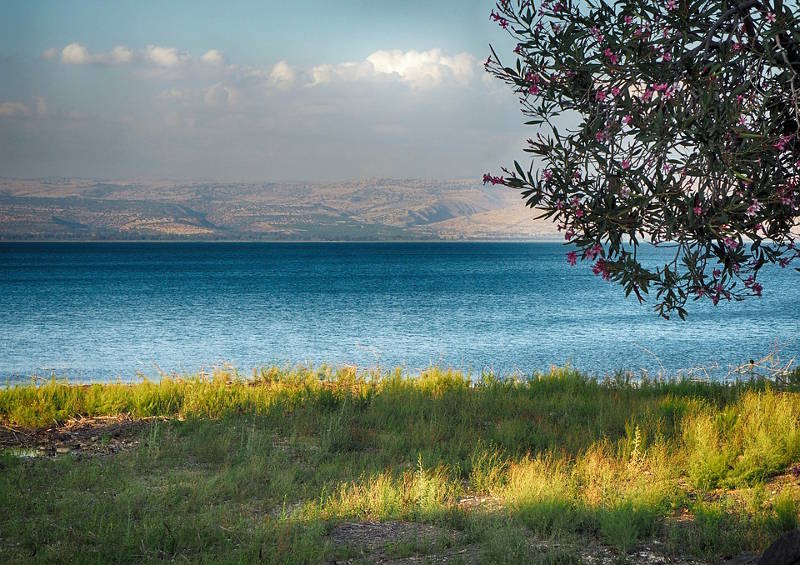 Capernaum and Tabgha are two of the most visited religious sites in the Holy Land. They are both located on the shores of the Sea of Galilee at a distance of 2 kilometers from one another. Visit both of them as a part of an easy and pleasant 4 kilometers walk.

Tabgha
Tabgha is located on the north-western shore of the Sea of Galilee. It is considered to be the place of the miracle of the multiplication of the loaves and fishes (Mark 6:30-46) and the fourth resurrection appearance of Jesus (John 21:1-24). Two churches are located in the compound. The Church of the Loaves and Fish and the Church of the Primacy of Saint Peter. These modern churches are built over ruins of ancient churches. An earlier one from 350AD and a later one from 450AD. Both were destroyed during the Parisian invasion around 600AD
Capernaum
Capernaum is located 2 kilometers Northeast of Tabgha. It is the sight of an ancient fishing village established around 100BCE. However, what makes it famous, is its major role in the new testament with numerous mentions in all four gospels. Today the area includes a Franciscan Compound, Greek Orthodox Compound, an archaeological site with a 4th century AD synagogue  and the ruins of what is believed to be the house of Peter the Apostle

A short walk near the Sea of Galilee:

Bethsaida
Ancient Bethsaida ruins is an archaeological site located on steep spur north of the Sea of Galilee, near the inflow of the Jordan River into the lake. It dates to the 10th century BCE and is identified as the capital of the kingdom of Geshur. (Joshua 13 11-13). The main find is an impressive gate complex leading to a paved square. The city was destroyed by the Assyrians during their invasion of the holy land around 700 BCE. The town was rebuilt in the 3rd century BCE as a fishermen village.
Bethsaida in the New Testament
Bethsaida is mentioned several times in the new testament: 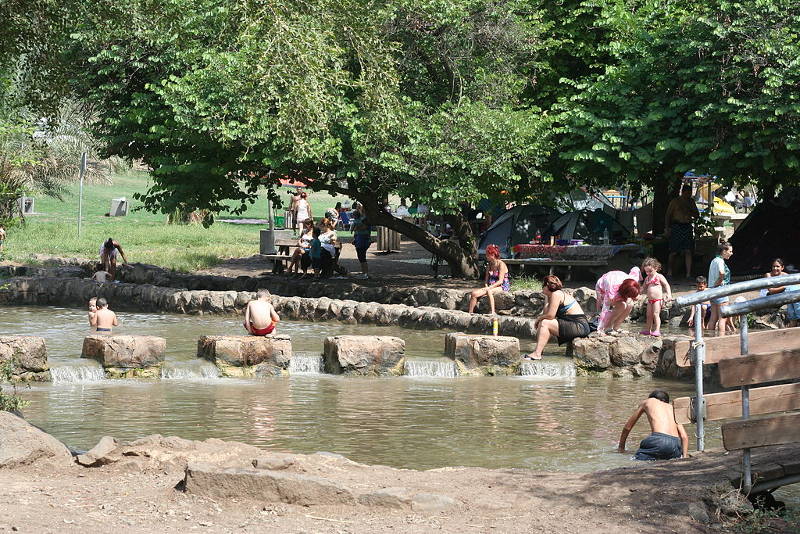