Over the years, Israel has become a cradle of a growing community of paddleboard enthusiasts in the region. This relatively young community has recently seen an explosion in popularity as more people from all over the world discover what Israel has to offer. Its warm climate and generally calm flat waters have attracted attention from competitive athletes to casual enthusiasts.

Among these large communities, we see smaller subgroups, including touring, racing, and wave riding communities. Each is carving its own niche in the ever-growing paddling community on this side of the Mediterranean. Before you dive in, you may be wondering what size paddle board you need – if so, Check out this guide on SUP sizing.

The 4 Seas of Israel

Contrary to what most people think, bodies of water surround Israel. In fact, these “seas”, as what the locals call them, have played a considerable role in the lives of the people since ancient times. Today, the seas are also gaining popularity among paddleboarding enthusiasts.

SUP on The Sea of Galilee 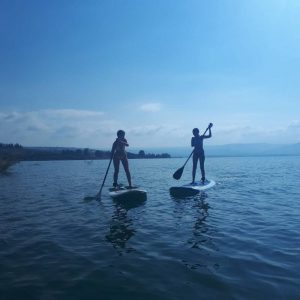 The Sea of Galilee?—also known as Yam Kineret?—is actually not a sea but a lake. At 166 square kilometers, it is the largest freshwater lake in Israel. That is almost as big as Washington DC! It’s located at the northeastern tip of the country right between Galilee and the Golan Heights. At just 200 meters below sea level, the lake is the world’s Lowest freshwater repository. It is also the world’s second-lowest lake just below (above?) the Dead Sea.

What used to be primarily a fishing ground is now seeing a growing community of water sporting enthusiasts. Its calm waters all year round make it a prime destination for standup paddleboarding touring and racing. This trend has since then seen a significant increase as more people come to flock the lake’s shores. Having your own gear is great, but there are also rental places and guided paddling tours. The banks of the lake are also a popular camping ground among outdoor enthusiasts.

There are also several historical places in the area that you can visit with easy access from the water, so paddling up to them would be amazing. Capernaum and Tabgha are two such places. These ancient settlements are home to various relics like ruins, mosaics, and other artifacts. They are also important landmarks in Christian history. Tabgha is considered to be the place of the miracle of the multiplication of the loaves and fishes (Mark 6:30-46). Capernaum also played a significant role in the new testament, with numerous mentions in all four gospels.

Located west of Israel, the Mediterranean is the country’s historic gateway to the rest of the world. At 170 miles, the Mediterranean coast makes up the whole western border of Israel. Major cities like Haifa and the Tel-Aviv are all sprung at this very coast.

Many paddlers also flock to the Mediterranean, although the water condition isn’t as consistent as the Sea of Galilee and provide conditions for both long-distance paddling and wave riding. During the summer season, the water is relatively calm with very small up to knee height waves, good for paddling and small waves surfing. October to April alternate between big storms that can bring waves up to head height, and flat glassy days suitable for paddling.

When the waters are calmer, it is the best time to visit some notable historical landmarks while paddling. These include Akko, an ancient port town with its variety of markets and historical landmarks. The old town’s stone walls are still relatively intact and are best seen on the water. Caesarea is another historical port town you can visit. It has Roman ruins such as pillars and an old amphitheater you can check out.

The lagoons at Dor Habonim Nature reserve is another great place to check out. The natural rock formations scattered around the area create beautiful scenery and also protect the lagoons from rough waves making the water calmer.

SUP on The Dead Sea 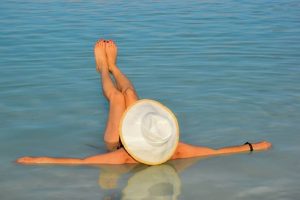 At 400 meters below sea level, the Dead Sea is considered the lowest lake in the world. The “sea”, which is actually a saltwater lake, got its name because no plant or animal lives in the lake. The very high salt content in the water—over nine times that of seawater—makes it inhospitable to live. But because of this high salt content, it is easier to float in the lake. That’s why pictures of people floating while reading newspapers became a thing back then.

Like the Sea of Galilee in the north, the waters of the Dead Sea are calm throughout the year. Winter is the best time to paddle in the lake when the temperature drops significantly. Winter’s get as low as 20 to 23 degrees Celsius in contrast to summers, which hover around 40 degrees on average.

When not exploring the lake on SUPs, there are tons of things to do around the lake. Climbing to Masada, Hiking in Ein Gedi, and Walking along with the shore lets you see the many unique “pillars” of salt, which harkens back to the story of Lot and his wife. The black mud found in the lake is also famous because of its supposed healing properties. Which is why people covered in mud is such a common sight. 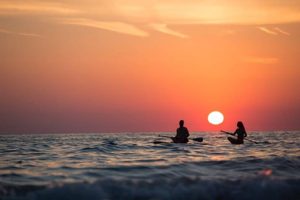 Finally, we have the Red Sea. Found at the southern tip of Israel, the Red Sea has played a considerable role in the region’s history. Nowadays, Eilat and its Red Sea coast have become one of the best-known tourist destinations in the area. This ancient settlement persists to this day as a top seaside resort city.

The Red Sea is generally calm with flat water conditions all year round. Eilat’s desert climate makes it really hot almost throughout the year, dipping only during the winter months. It makes it the perfect time to go paddling at the gulf. It’s a great experience to paddle in the bay just before sunset when the surrounding mountains are “painted” with reddish colors.

Aside from paddleboarding, other water activities are quite popular in Eilat as well. The rich marine life in the region makes it a great scuba diving and snorkeling spot. There are plenty of dive spots to choose from, all of which uniquely gorgeous in their own right. Being a touristy spot, Eilat also has a very vibrant nightlife. There are a lot of clubs and bars to choose from. From laid back chill spots to rambunctious dance clubs, there is undoubtedly something for everyone.