Even if you are not an addict “Birder”, but you are a nature lover visiting Israel, this is something not to be missed!!

Israel is situated on a corridor along one of the world’s most important and busiest migration flyways. Twice a year, more than 500 million birds from 550 species fly over Israel. The entire continent of North America, which is 1,000 times Israel’s size, sees barely twice as many species.

In the autumn Between late August and mid-December hundreds of Millions of birds leave their nesting grounds in Europe and Asia, and cross Israel on their way to the wintering grounds in Africa. Israel is their last “fueling” spot before their 5-day journey crossing the Sahara Desert.
The best place to enjoy the phenomena is Agamon Hula Park.

The peak period is usually in November when the “Annual Hula Valley Bird Festival” is held. The exact dates are announced each year according to the forecast for the peak of the bird’s migration traffic. However, also if your visit to Israel does not overlap exactly the Festival, but occurs anytime in the fall (September to Mid-December), Don’t miss a visit to the “Agamon” (little lake in Hebrew).

The best time for the activity is very early in the morning, around dawn, when the birds start their day. The Agamon has organized Sunrise Guided Tours every Friday and Saturday during the migration season. It is recommended to register in advance.  The tours are done in a “Safari Wagon” that lets you get close to the birds without scaring them away. 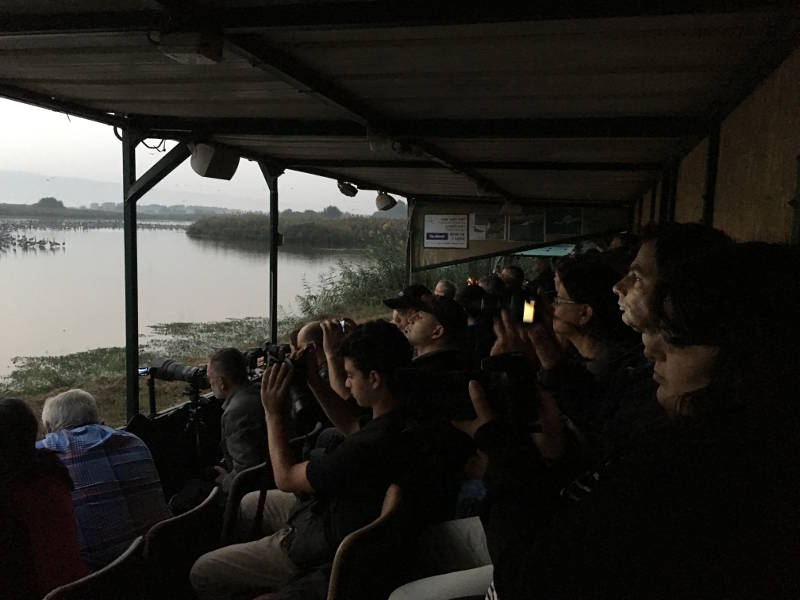 Tours are in Hebrew, but also a foreign tourist can enjoy it and the guide will usually repeat the highlights also in English. If waking up before 06:00 is too “radical” for you, You can opt for the sunsets tours or day tours. (Or just visit without taking a tour). If you don’t have binoculars with you, it can be rented on sight. (Highly recommended!)

The spring time from March to Mid-April, Brings the same excitement. But now the traffic is in the opposite direction. During this period, Hundreds of millions of exhausted birds, the land around Eilat, after several days of crossing the Sahara Desert and the Sinai Peninsula.

The peak time is Mid-March when the Eilat Birding festival takes place. (Usually during the 3rd week of March). Don’t miss a visit to Eilat Birding Center if you are visiting the city during the spring. Another spot in the area is Lotan Nature and Bird Reserve.