Qumran is a national park in the northern Judean desert in Israel. The site got its fame from being the location where the legendary Dead-Sea scrolls were discovered in the Qumran caves.

Besides the impressive archeological findings, it has incredible stories surrounding it. If you are into adventure activities, it’s a great starting point for a hike and a famous rappelling course.

In 1946, a Bedouin teenager accidentally found seven ancient scrolls housed in jars in a cave in the wadi near Qumran. He had no idea that this was the beginning of such a significant discovery. Today we know that the Dead Sea scrolls are one of the most important archeological findings in Israel’s history, but at that time, the first seven scrolls were sold to an antique dealer in Bethlehem for a total of 28 USD! 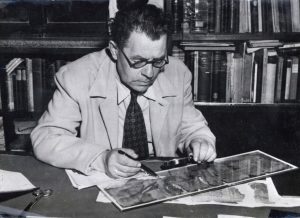 Very symbolic, in 1947 professor Eliezer Sukenin from the Hebrew university purchased the scrolls in Bethlehem exactly on the day of the UN resolution on the establishment of the state of Israel.

Prof. Sukenik describes the event:
“I shivered, and I started to look at one of them. I read several sentences and found written scriptures in wonderful biblical Hebrew, much like the book of Psalms.”


A total of 20 complete scrolls and 16,000 fragments of scrolls were found in 12 caves between 1947 and 1956. Out of these fragments, Researchers have assembled a total of 981 manuscripts. Most of them are books of the Torah (Old Testament) written in Hebrew by our ancestors. It is the 3rd oldest Torah text ever discovered. No one survived from the Qumran community, but the scrolls remained for 2000 years! On this guided day tour of Judea and Samaria we will take you to three of the highlights of the region – Bethlehem, Jericho and Ramallah. With thorough information provided by a local guide.

The Essenes was a sect of Jews that lived in the land of Israel from the 2nd century BCE until the fall of the 2nd temple. Many thousands of Essences were living in many cities. What makes them famous today is the belief that the Qumran community was an Essenes community and that they were the writers of the Dead Sea scrolls. The Essenes lived a strictly communal life and observed the rules of Moses strictly as they were written in the Torah.  We have first-hand knowledge of their lifestyle which they documented in detail on some of the scrolls.

Further Reading:
Who were the Essenes?
The Mystery Holy Men Behind the Dead Sea Scrolls

In early 1949, archaeologists located Cave 1; This sparked the archaeological research of the area. In this cave, one mile north of Qumran Canyon remains of at least 70 manuscripts were found, including passages belonging to the original seven scrolls.

At that time, the Bedouin continued to search for scrolls, as they recognized it’s commercial potential. The Scrolls that the Bedouin found in other caves proved that the finds in Qumran Cave 1 were not accidental and that there are scrolls also in other caves in the Judean Desert. From 1951 to 1956, Eight kilometers of the cliffs around cave number one were surveyed. Eleven caves were found that yielded remains of written scrolls. The Bedouin discovered five caves, and six more caves were discovered by archaeologists. Most of the caves are manmade and were hewn the marl soil. It is believed  that the caves were built as a hiding place for the scrolls when the Qumran residents  realized that they are about to be conquered and destroyed by the Roman legions (68AD) 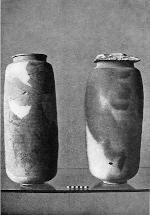 Qumran Cave 1: Discovered by a Bedouin boy, a shepherd, in 1947; Excavated by archaeologists in 1949. Scrolls of the Judean Desert were first discovered in this cave. The first discovered scrolls were well preserved, as they were probably buried in elongated sealed pottery jars. The scrolls found in this cave have revolutionized the study of Judaism and early Christianity.

Qumran Cave 3: Discovered and excavated by archaeologists in 1952. TIn his cave two parts of a unique copper scroll were found. The text is a list of sites in the Judean Desert and around Jerusalem (Perhaps the places where the temple treasures were buried). Alongside the Copper Scroll, there were sections of about 12 biblical and non-biblical scrolls, including a copy of the Book of Jubilees. 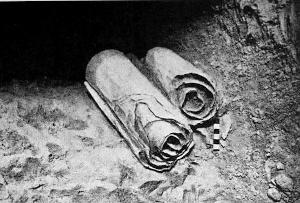 Qumran Cave 4: Was discovered by Bedouins in 1952. It is the most famous of the Qumran caves. Thousands of scroll fragments containing hundreds of manuscripts were found.  The findings account for 75% of the total scrolls discovered in Qumran caves. The manuscripts have biblical texts, biblical commentaries, halakhic-Jewish literature, prayers, Tefillin, and Mezuzah. Most of them were in poor preservation conditions and very difficult to read and translate. It is the cave that appears in most of the photos, and it is clearly seen from the observation deck of the national park.

Qumran Cave 5: Discovered and excavated by archaeologists in 1952. The cave contained fragments from some 25 scrolls, including biblical and sectarian texts.

Qumran Cave 6: Discovered by Bedouins in 1952. The cave contained fragments from about 31 scrolls, most of them written on papyrus, including biblical texts, hymns, and sectarian essays. This small cave is the most accessible to visitors today. (Though entry is not allowed!)

Qumran Caves 7 – 10:  Were discovered by archaeologists in 1955. All manuscripts found in Cave 7 were written in Greek, including a translation of a book of Exodus. Cave 8 contained several passages from Genesis, Psalms, Mezuzah, Psalm, and Tefillin. Caves 9 & 10 did not provide any significant findings.

Qumran Cave 11: Was discovered by Bedouins in 1956. The last scrolls discovered to date in Qumran caves were found in this cave. The remains of some 30 manuscripts were found, including some almost complete scrolls: Leviticus (ancient Hebrew), Psalms, and the Aramaic translation of the Book of Job. The most exciting find in this cave is the Temple Scroll, which is the longest of the Dead Sea scrolls. It describes in detail regulations concerning Jerusalem and the temple.

The discovery of cave 1, sparked also the research and the excavation of the archeological remains that were scattered on the hill opposite to caves 4 & 5.
Qumran was a flourishing Jewish settlement that existed during the Second Temple period (7-8 Century BCE). It is believed that its inhabitants were members of the Essenes sect. The settlement was inhabited by a men-only community that lived a cooperative life. It is considered to be the world’s first known monastery (Jewish). One of the most famous people from Qumran is John the Baptists, that was part of the community before he started baptizing. (Read more in Bible Odyssey)

The complex is made off public buildings, while the community members lived around in about 30 caves, tents, and sukkahs. The complex’s buildings were kept in good condition thanks to the arid climate in the Dead Sea Valley. Qumran is identified with “Secacah” mentioned in the Bible as one of the six desert cities of the tribe of Judah. Joshua 15 61-62: “In the wilderness, Betharabah, Middin, and Secacah, And Nibshan, and the city of Salt, and En-gedi; six cities with their villages”.

During the Great Revolt against the Romans, the sect sided with the rebels. The residents of Qumran prepared themselves for the worst and hid their precious treasures (the scrolls) in the caves.  The Romans indeed conquered Qumran (68AD), destroyed it and dispersed the sect, leaving the ruins abandoned for almost 2000 years.  Today, impressive remains can be explored at the Qumran National park.

It is recommended enhancing a visit to the national park with a short hike up the Qumran canyon. The hike is straightforward. Follow the Green marked path up the canyon to enjoy fantastic views of the Dead Sea and tranquil desert atmosphere. Walk for about 1.5 Km until the trail starts leaving the gorge. (Until the red “X” on the attached Map) 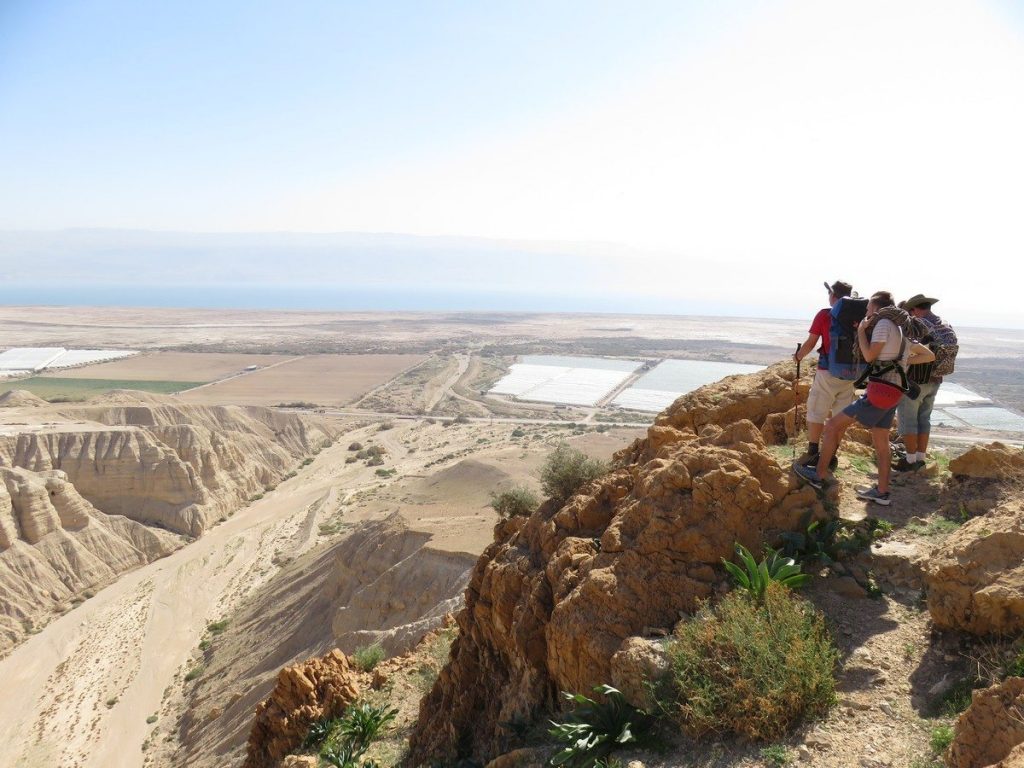 More Hikes in the Area ➢
Go to top

There are 2 recommended lodging options near Qumran:

I am Erez Speiser. I live in the Galilee region in Israel. By education, I am a mechanical engineer. In 2018 I founded "Israel by Foot" to promote hiking tourism in Israel. Learn more in the About me Video. Do you want me to help you plan your hikes in Israel? Check out here. Or contact me erez@hike-israel.com
Go to top

What is the meaning of Qumran?

The ancient name of the settlement was “Secacah”  ( Joshua 15 61-62). The name Qumran is from the Arabic era and is derived from the Arab word “Kumar” meaning moon.

When was Qumran destroyed?

Qumran was destroyed by the Romans during the Great revolt on 68AD.

Where are the Qumran caves?

The caves are scattered on cliffs rising above the Northern Dead Sea near Kibbutz Kalia.

What scrolls were found at Qumran?

Who lived in Qumran?

Jewish sect of the Second Temple period called the Essenes.

What Bible books were found in the Dead Sea Scrolls?

Every book is represented among the Dead Sea Scrolls, except the book of Esther.

Who owns the Dead Sea Scrolls?

Most (99%) of the Dead Sea Scrolls are under the ownership of the Israeli Government and housed in the Shrine of the Book on in Israel Museum in Jerusalem. A few are owned by the state of Jordan, Universities, and Museums.

Can we read the Dead Sea Scrolls?

Most of the Dead-Sea scrolls are written in Hebrew. If you know Hebrew, you can read them online at the Digital Dead Sea Scrolls website

Where Are Dead Sea Scrolls kept?

Most of the Scrolls are housed in the Shrine of the Book, Israel Museum, Jerusalem. 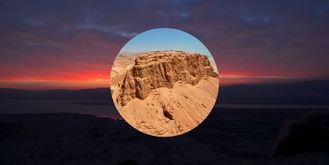 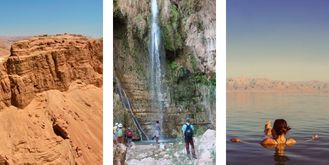