The unique landscape on a white Salt Mountain. Mount Sodom’s soil containing 80% Salt, creates a unique landscape that cannot be found anywhere else. It is also the setting of the Biblical story of Sodom and Gomorrah that is mentioned more than 20 times in both the old and new Testament.

Sodom the symbol of Destruction
Standing on the summit of Mount Sodom and looking at the harsh dry landscape that surrounds us we can understand why the extermination of Sodom and Gomorrah became the ultimate symbol for punishment and destruction.

Biblical References (Few examples out of many) –
Old Testament:

Matthew 10:15 - Sodom as an example of the ultimate punishment
“Truly I say to you, it will be more tolerable for the land of  Sodom and Gomorrah  in the day of judgment than for that city.”
Explanation: In the day of judgment. Sodom and Gomorrah had both been destroyed by fire from heaven, and the gloomy waters of the Dead Sea were spread over the place where these cities stood. Our Savior, therefore, instead of representing that the sorrows and sufferings of this life are the sole penalties of human guilt, taught that even Sodom and Gomorrah were awaiting terrible retribution to come. (Abbott)
2 Peter 2:6-9 - False Teachers and Their Destruction
“and if He condemned the cities of  Sodom and Gomorrah  to destruction by reducing them to ashes, having made them an example to those who would live ungodly lives thereafter; and if He rescued righteous Lot, oppressed by the sensual conduct of unprincipled men” (Full Text)
Explanation: False teachers will arise. If God did not spare angels, then he knows how to punish the unrighteous. They are slaves of corruption. (Full Explanation)
Biblical Story: The destruction of Sodom and Gomorrah
The area around Mount Sodom is also the setting of the Sodom and Gomorrah story (Genesis 18-19 Full text).
One day, God appears to Abraham in the form of three men.  The men traveled towards the towns of Sodom and Gomorrah to destroy the cities because of their wickedness and corruption. Abraham pleads on the cities’ behalf, convincing the Lord not to destroy the cities if only a handful of good people can be found there. The messengers enter the city of Sodom, and Lot welcomes them into his home. Night falls, and the men of the city surround Lot’s house, wishing to rape the three messengers. The messengers persuade Lot to flee the city with his family, telling him and his family not to look back as they leave. However, as God rains down burning sulfur on Sodom and Gomorrah, Lot’s wife looks back at her home, and she turned into a pillar of salt. (Full Commentary)

Listen to Genesis 18 & 19 – The destruction of  Sodom and Gomorrah

Mount Sodom is a relatively young mountain that began its rise only a few hundreds of thousands of years ago and still continues to grow taller now at a rate of 3.5 millimeters (0.14 Inch) a year.
Earth Movements, pressing down on the layers of salt, created Mount Sodom. It is composed of 80% salt, capped by a thin layer of limestone and clay. It rises 260  meters above the Dead Sea and creates a unique landscape scenery of bright white soil penetrated by winding crevices.

The mountain is perforated with about 150 salt caves. It is the largest concentration of salt caves on the planet. The caves feature amazing salt formations. Most of the caves are closed to the public due to the constant danger of rock collapsing. A few of them are open for visits and can be accessed only by rappelling through “Salt chimneys”.

Join us for an unforgettable underground adventure…EXPLORE MORE

Join us for an unforgettable underground adventure…EXPLORE MORE

Those who want to shorten the trip can continue straight with the ‡Red‡ markers directly to point (5) and “save” 3  Kilometers. (But miss and exciting section of the hike!!

Automatic immediate email with a download links upon checkout! 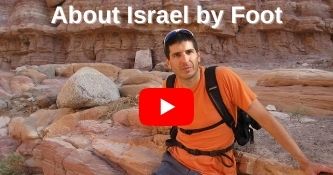